Does high education lead to a high salary?

ETUC, the European Trade Union Confederation, is running Our Pay Rise, a campaign promoting a recovery of EU by means of a pay rise. 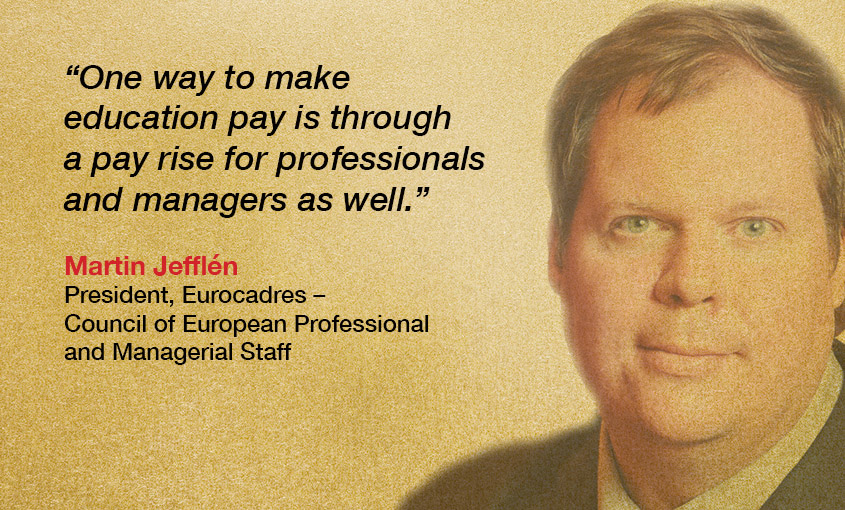 As a trade unionist representing professionals and managers, from to time I have reason to underline that a higher education is probably the best safeguard against unemployment. But that does not mean any foolproof guarantee.

Youth unemployment has been extremely high in several EU Member States, and the highly educated have been among those affected. The brain-drain has been a problem especially in the countries most troubled by the crisis, where young professionals have left home to seek jobs elsewhere in Europe, quite often ending up in work requiring lower skills than those they have obtained through education.

The investment of time and money in a higher education does not always pay off in terms of lifetime earnings. You are more likely to get a higher salary with a higher education, but there are no guarantees even in a job fitting the acquired educational level. Depending on systems of financing of higher education, as well as tax systems, the so-called ‘private rate of return to education’ can differ a lot.

The right to organise
One way to make education pay is through a pay rise for professionals and managers as well. For us it is not always the trade union demanding a pay rise in a collective bargaining round. The higher up in the occupational categories you get, the more common individual negotiations and contracts become. That does not mean, however, that there is no place for a trade union. Professionals and managers have interests as employees and can promote these interests by organising in trade unions, and by collective bargaining.

Legislation and national traditions differ across the EU, and in some cases, managers are excluded from collective bargaining and social dialogue. In fact, looking across the globe, not even the basic human right to organise in a trade union can be taken for granted. This right is regularly violated, as many managers are banned from joining trade unions. In the public sector, the ILO Convention on labour relations in public services even states that national laws shall determine whether the guarantees of the convention apply for managers.

With the growth of what are often referred to as ‘new forms of employment’, more and more people no longer fall under traditional definitions of worker or employee. This can, for example, affect the right to social security, which is why the Commission has recently been preparing a proposal on access to social protection, linked to the European Pillar of Social Rights. But this development also creates challenges regarding the freedom of association. EU competition law has in some cases been taken as an excuse to restrict the right of self-employed people to collective bargaining and organising in some EU Member States. It is obvious that trade unions must challenge this.

Women graduate – yet men are managers
For women aspiring to become managers, the glass ceiling is still very much a reality. Only one in three managers in the EU is a woman, even though there are more female than male graduates. The difference is as high as ten percentage points with 44% of women and 34% of men completing tertiary education. And yet, women on average earn 16.3% less per hour worked. In managerial positions, the gender pay gap is as high as 23.4%, meaning that it actually increases in the higher pay grades.

The gender segregation on the labour market makes no exception for the highly educated. Female-dominated jobs requiring high skills pay less than male-dominated ones, often in the private sector, with equal requirements.

For Eurocadres, representing professionals and managers, this is not an acceptable situation. Action is needed to put an end to the gender pay gap as well as tackling the glass ceiling. In the latter case, the European Union could make a difference by pushing forward the women on boards Directive. This has been stuck in the Council since it was introduced by the Commission in 2012. The Maltese EU Presidency in 2017 tried to end the deadlock, but with very limited results.

That does not mean there is no progress whatsoever. The proportion of women on the boards of the largest listed companies in the EU more than doubled between 2005 and 2015. But this takes it from the very low starting figure of 10% up to 22%, and still leaves the EU well below the 40% target of the Directive proposal.
At the highest level, the numbers leave even more to be desired, with women making up only 7% of board chairs and presidents and a shocking 6% of chief executives. There is a pressing need for a culture change. For that change to happen, it must also happen in the board rooms.