The recently published ETUC/ETUI study, ‘Benchmarking Working Europe 2019’, reports that despite the rise in the number of highly skilled professionals, within the European Union (EU), there remains a gap between those highly-skilled workers and the number of appropriate jobs available to them. 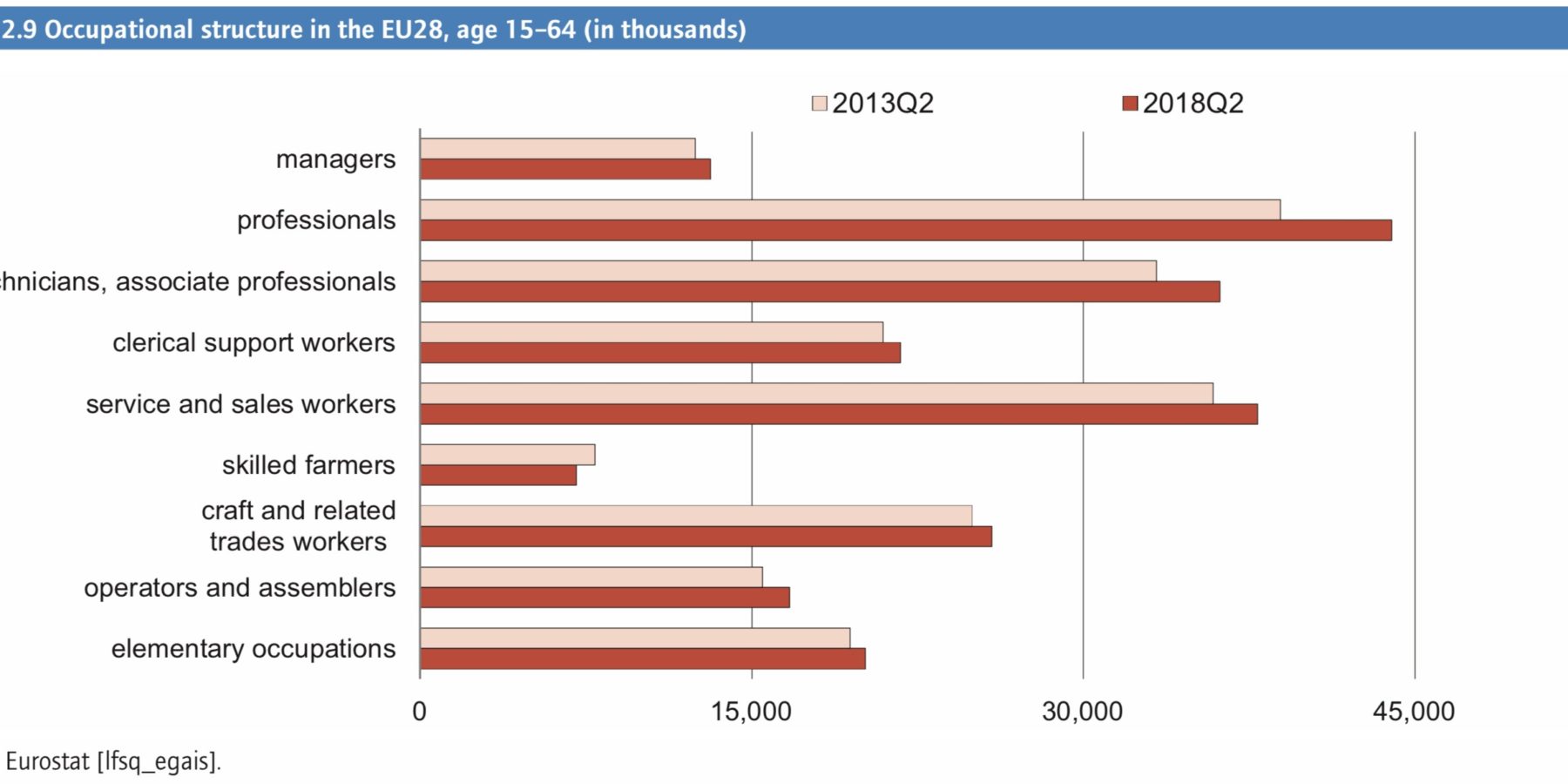 Despite positive structural changes in higher education, among the EU’s workforce, this is not necessarily corresponding to the supply of quality jobs, matching workers’ qualifications, which can lead to the underutilisation of skills and of human capital, among this growing area of Europe’s workforce.

The Benchmarking report notes that in 2015, 28.2 per cent of EU citizens reported that they had skills to cope with more demanding duties, ranging from 41.9 per cent in Romania to 16.4 per cent in Lithuania. With 14. 5 per cent seeing themselves as under-skilled for their current job.

In some Member States there is a clear underutilisation of highly skilled workers.

Martin Jefflén, President of Eurocadres says the new report shows that, ‘in some Member States there is a clear underutilisation of highly skilled workers. If there are no jobs for the highly skilled, they will either take up jobs needed by those with less skills or contribute to the brain drain, away from their home countries.’

‘It is a rather polarised EU we see. In parts of the EU the skills mismatch problem is mostly because there is a lack of highly skilled labour. In particular in the crisis-ridden countries there is instead a shortage of jobs for high-skilled workers,’ Jefflén continues.

Continuing the theme of underutilisation of job skills, the study also highlights the potential risk of underutilising highly skilled workers, stating ‘In Greece an increase by nearly 20 per cent in tertiary education among 30-34-year-old workers is at odds with the lack of growth in the supply of high-skilled jobs in the same period’.

The Benchmarking study also shows that job growth in the European Union (EU) has been increasingly concentrated in high skilled occupations in recent years. The report finds that on average professionals have been the fastest growing occupational ground in the EU, since 2013, with this sector expanding by 5 million jobs, at a growth rate of 13 per cent.

Job growth in the European Union (EU) has been increasingly concentrated in high skilled occupations in recent years. 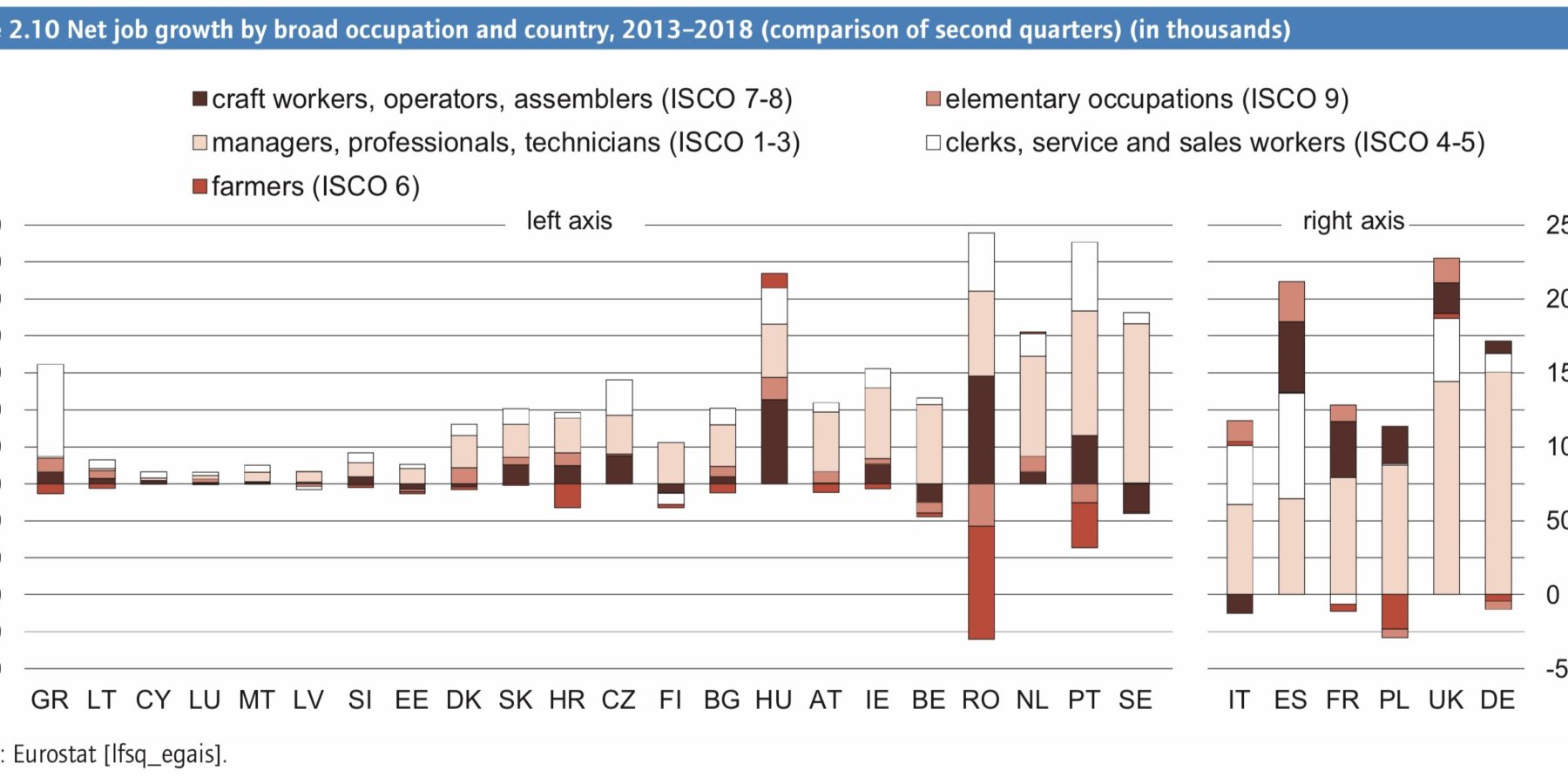 Throughout the EU, the capacity to generate high-skilled jobs differs across Member States. For example, in Finland, high-skilled white-collar occupations (managers, professionals and technicians) were the only occupational group that showed job growth between 2013 and 2018. Job growth was also concentrated in these occupations in Germany, Sweden and Belgium, Latvia and Estonia.

Dr Agnieszka Piasna, the ETUI researcher, who wrote the ‘Changing jobs and skills’ section of the Benchmarking report notes that ‘in countries such as Germany, Belgium or Sweden, high-skilled white-collar jobs accounted for nearly all net job growth between 2013 and 2018. In contrast, in Greece, Spain, Lithuania or Hungary job growth was concentrated in low skilled services or manual occupations.”

The researcher went on to say that the differences between Member States, regarding the creation of highly-skilled jobs is ‘to some extent reflects differences in investment and competitiveness strategies across countries. A growth of high productivity sectors employing highly skilled professionals requires long-term investment, and certainly policies of internal devaluation pursued in the southern European countries did not foster high productivity growth’. Hence, ‘in Greece virtually no new jobs were created for professionals, since 2013’, the report notes.