The situation in Belarus, artificial intelligence, the right to disconnect, gender pay transparency and the launch of EndStress.EU. The agenda was broad when trade unionists representing professionals and managers from all around Europe met online on 15 October for the 2020 Eurocadres General Assembly. 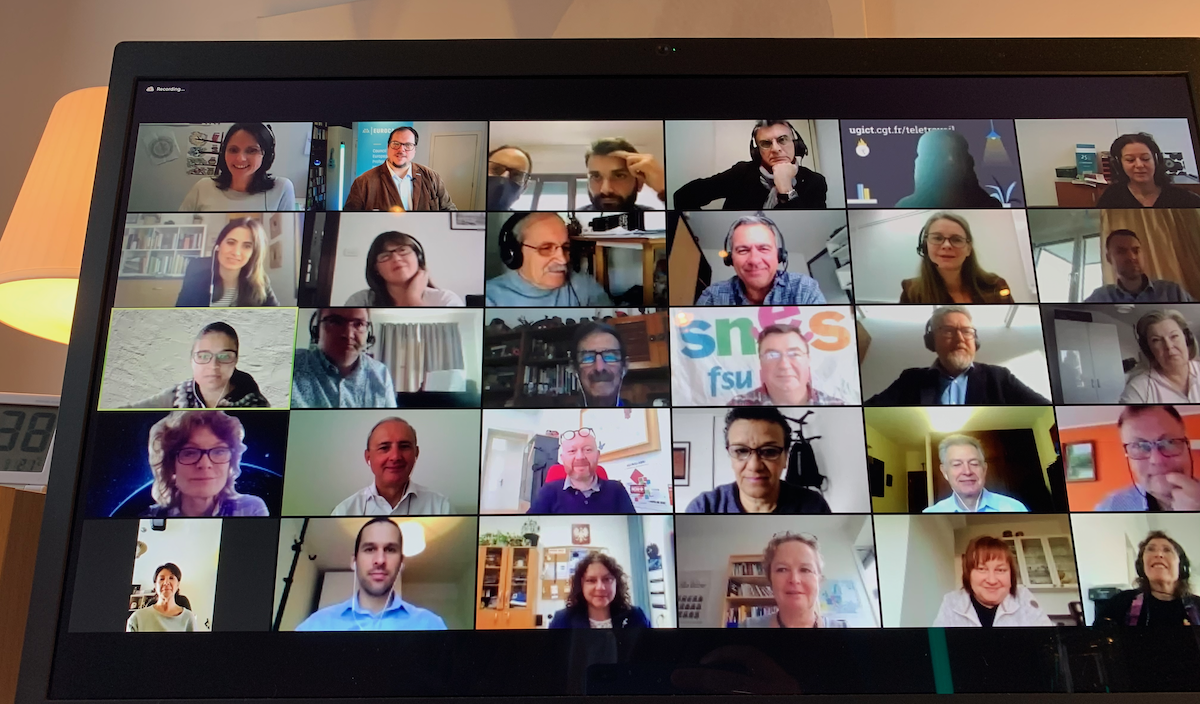 The General Assembly is the annual gathering of Eurocadres' member organisations. It adopts resolutions and approves the annual report.

As all Eurocadres meetings during COVID-19 times, the 2020 General Assembly was an online meeting.

–There are upsides to going digital. We can have people join the discussion which would not travel for a one day meeting, says Martin Jefflén, President.

The annual report to the General Assembly described the challenges the pandemic has entailed for Eurocadres' activities:

"Due to the COVID-19 pandemic, most of our planned advocacy activities for the first half of 2020 came to a standstill. We were not able to launch our EndStress.EU campaign on time and start the lobby activities around it. National trade unions struggled with workload due to the pandemic and were not able to prioritise the work on the transposition of the whistleblower Directive and member states did not initialise transposition work. Our skills project activities had to be replanned to online formats."

Another topic on the agenda dealt with the trend to carry out more work online. In the resolution on the right to disconnect both collective bargaining and legislation were underlined as ways forward to deal with the problems of not being able to disconnect.:

The problems relating to not disconnecting must be addressed wherever possible.

"Trade unions are an important part of the solution through our participation in social dialogue and collective bargaining. The problems relating to not disconnecting must be addressed wherever possible. We take the responsibility to develop and promote remedies which can be tailored through sectoral and company collective bargaining. [...] We urgently ask the Commission to propose a directive which fully respects national and sectoral collective bargaining structures and traditions."

In the right to disconnect discussion the work organisation and mental health aspects are important. The General Assembly addressed these topics in the resolution linked to the public launch of the campaign platform EndStress.EU. The resolution calls for "a new EU directive which addresses psychosocial risks, violence and harassment and improves work organisation".

The General Assembly also addressed digitalisation in a third resolution, dealing with professionals' and managers' responsibility for an ethical artificial intelligence, AI. Eurocadres called for an authority where trade unions are represented and "that aims to

In his opening speech Martin Jefflén, Eurocadres President, underlined the necessity for the Council to move forward on the women on boards directive, which has been blocked since 2013.

–It is a disgrace that the Women on Boards directive has not yet been adopted. More action is needed to change the structure and culture of male dominance in the corporate world

–It is a disgrace that the Women on Boards directive has not yet been adopted. More action is needed to change the structure and culture of male dominance in the corporate world and this directive would be one important piece of the puzzle to create more equal career opportunities for women, said Martin Jefflén.

The topic of gender quality was also addressed in a resolution on the gender pay transparency initiative, also this delayed.

–With this resolution we urge the Commission to come forward with a proposal, which they have promised, and not to stop gender equality policies which are now more important to put forward than ever because the pandemic and the economic crisis is touching women much more than men, said Slavica Uzelac, Executive Officer, when introducing the resolution.

Stop the violence and oppression in Belarus

The general assembly also adopted a resolution commenting on the situation in Belarus, stating that "With hundreds of journalists thrown in jail, daily violence against peaceful protests and clear violations of democratic rights, including trade union rights, the urgency to address the situation in Belarus is greater than in decades."