This May 1st, we look back at the progress made these past 12 months. 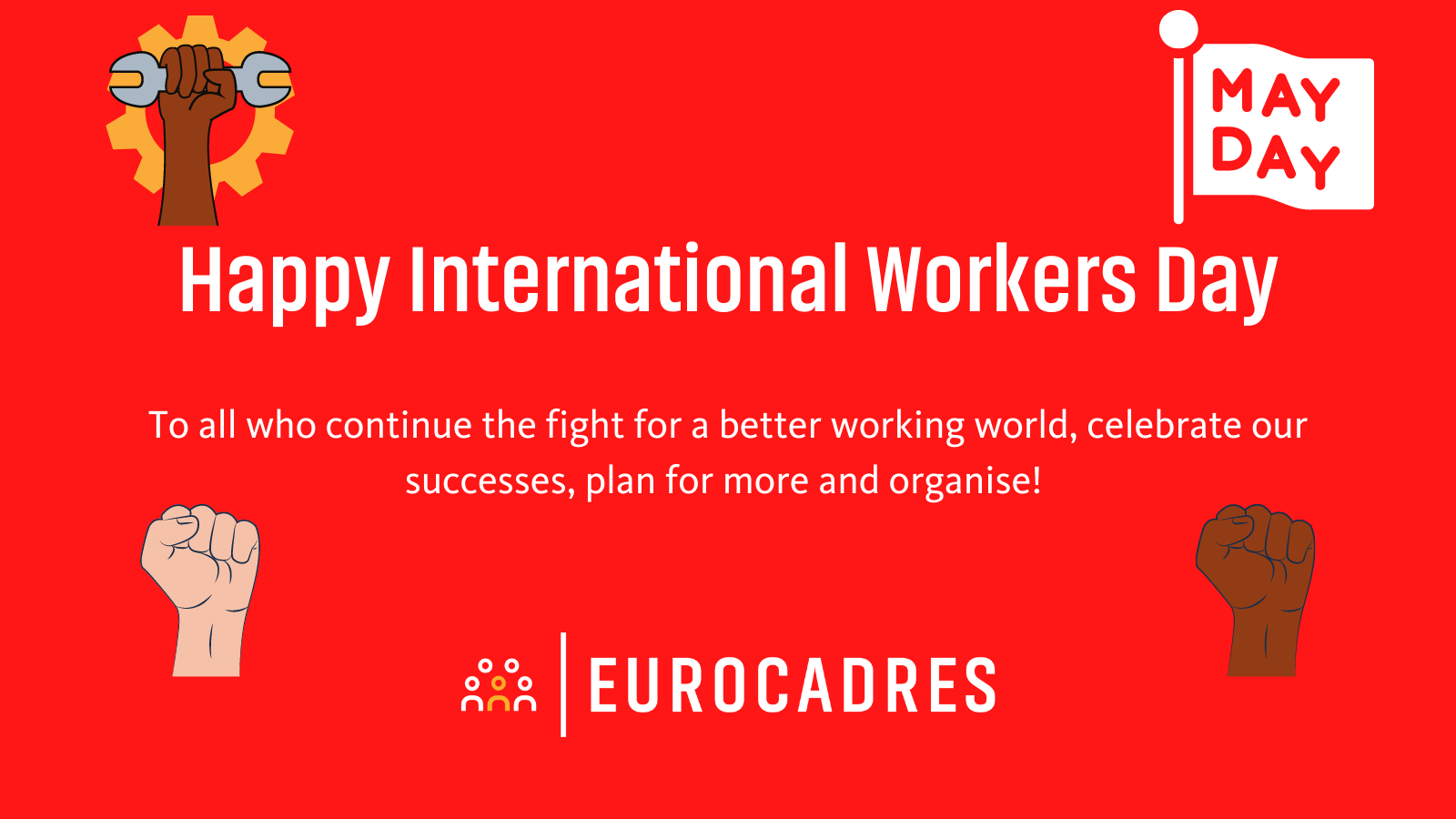 International Workers Day is a day to celebrate all we have achieved for workers’ rights, commit to protecting these victories, and gather to call for further progress. European workers are experiencing a number of critical issues, with Putin’s war on Ukraine, inflation, the fuel crisis, our pandemic recovery and the changing of our working world to green and digitalise our economies all placing pressure on citizens. In spite of these challenges, trade unions have continuously delivered for workers, overcoming the odds time and time again. This May 1st, Eurocadres looks to celebrate the achievements of the past twelve months.

Through the Women on Boards proposal and the Gender Pay Transparency Directive, this year has seen a vast improvement in the legislation that supports gender equality, and that pushes for an equal society. The disparity between genders has been well documented, with women in the EU earn on average almost 15% less per hour than men, and representation lacking in management positions. Through the Women on Boards directive, companies will need to reach the minimum target of having 40% of non-executive director positions held by women, or 33% if all board members are included, by 2027, while the two-thirds of the gender pay gap in the EU being unexplained will be changed through the pay transparency directive. Both advancements are a huge step towards reaching gender parity in Europe.

This year has also seem the role of platforms scrutinised by the European institutions, with their malpractices being targeted through a range of legislative proposals. For professionals and managers, the draft platform workers directive represents a huge step forward, as it sets to legislate against exploitation by large platform companies by delivering on the presumption of employment, the right to representation and transparency in the use of algorithms by digital labour platforms. It is clear that the tide is turning on platforms in Europe, with the French authorities already cracked down on their malpractices.

The proposed directive can be improved during the negotiation period, but the proposal itself is a victory for platform workers.

In addition, the adoption of the Digital Services Act (DSA) and Digital Markets Act (DMA) will significantly alter the digital landscape, and put an end to the digital wild west, where companies loose self-regulation has had dire consequences for workers and consumers. These legislative initiatives will bring Europe to the forefront of global efforts to rein in these platforms, and place citizens rights at the centre of our online world.

While the upcoming AI act has the potential for the European Union to set the standard for algorithmic transparency and the promotion of human-centric technology, more work must be done for Europe to deliver real protection for workers. Trade union concerns addressing privacy, surveillance of workers and their performance, and the collection of their data must be addressed, with protection of the right to privacy paramount. Quality working lives must be enshrined in our legislative approach, with risks of compromising the dignity of workers a concern.

While workers are on course to receive improved security in their positions from platforms, and while ETUC’s campaign on Zero Deaths at Work begins in earnest, the mental health of European workers has not yet been dealt with adequately. However, our EndStress.eu campaign has seen a significant increase in traction from legislators throughout Europe in the past year, with two Parliamentary reports (one formally adopted, another set for a plenary vote) calling on the European Commission to propose a directive on work-related psychosocial risks. 88% of EU workers have experienced stress problems at work, while workers are the one paying the price for poor planning, with prevention-related budgets across all EU Member States at a mere 3% of total health expenditure. The European Parliament has seen the need for action, including a functioning right to disconnect and directive on work-related psychosocial risks, with the Swedish Presidency of the Council of the European Union (beginning in January 2023) set to prioritise improving existing legislation. This is a huge change in the landscape compared with last year, and is cause for optimism for European workers.

A longstanding Eurocadres campaign, the transposition of the European Whistleblower Protection directive was also advanced this year, with eight national laws adopted and only one Member State failing to begin the process. Originally not on the legislative agenda, Eurocadres’ advocacy efforts delivered a European directive that protects the brave citizens who blow the whistle on company malpractice. This year, thousands of individuals will receive the protection they deserve thanks to this regulation. The EU Whistleblowing monitor will continue to update on the Member States yet to adopt any legal protection.

We have also seen the Commission’s proposal for an anti-SLAPPs directive, which includes many of our longstanding demands. Strategic lawsuits against public participation, commonly referred to as “SLAPPs”, are abusive litigation efforts brought forward by powerful actors and are used to harass and silence individuals from speaking out in the public interest. SLAPPs have been a thorn in the side of countless public interest causes, threatening democracy and fundamental rights, access to justice and judicial cooperation, freedom of speech and the enforcement of EU law. SLAPPs have played a hugely detrimental role in Europe for a number of years, blatantly persecuting those who wish to highlight matters of public interest. We welcome the Commission’s proposal, and call for quick agreement on the text between institutions and Member States. These measures must be enshrined in European and national law as soon as possible.

September 15, the European Parliament voted in favour of the amended Blue Card Directive text by 556 to 105, with 31 abstentions, following years of interinstitutional negotiations. Originally adopted in 2009, the directive failed to have a meaningful impact, with discussions on amendments underway since 2016, but blocked by the Council. The Blue Card scheme provides an attractive platform for workers to enter the European labour market, opening clear and transparent channels for migrants, while ensuring Member States’ have flexibility in maintaining schemes to fit their labour market needs. Revisions also expanded the scope to include refugees, asylum seekers and seasonal workers, all of whom will now be able to apply for the card, while the rules on Blue Card holders’ families relocating to the EU are improved, with blue card holders & their families now able to accumulate years for long term residence even if moving to other EU countries.

In our pandemic recovery and green/digital transitions, the re/up-skilling of European workers has received a prominent position. Speaking to the European Forum in November, Eurocadres President, Nayla Glaise, outlined the steps needed to deliver on our political promises. “We have three decades to implement a full decarbonisation of the European economy. At the same time, we have growing inequality throughout Europe, and need to ensure a just transition for workers and communities. professionals and managers have a key role to play in holding employers accountable, and delivering a truly social Europe. Europe is facing an uphill battle in the digital transition, for example there is currently a gap of 291,000 professionals in cybersecurity. The Commission’s efforts to define a taxonomy of skills for the green transition, which will allow the statistical monitoring of the greening of professions, is a welcome first step”. With widespread recognition of our need to alter our world of work, trade unions have continued to advocate for opportunities to re/up-skill as a part of the working day, and for the EU and national governments to place workers at the heart of these transitions. Through our role as social partners and based on our conversations with European leaders, we are confident that further dialogue will deliver for Europe’s professionals and managers.

On reflection, the past twelve months have provided many positive steps for workers throughout Europe, but our work is far from over. This International Workers’ Day, we celebrate these successes while preparing for the next in the years ahead!

Building back better through the European recovery fund