The own-initiative report on the legitimate measures to protect whistleblowers acting in the public interest by Virginie Rozière was voted through in the European Parliament today by 399 votes for and 101 against. This is a strong political message that Europe needs whistleblower protection. 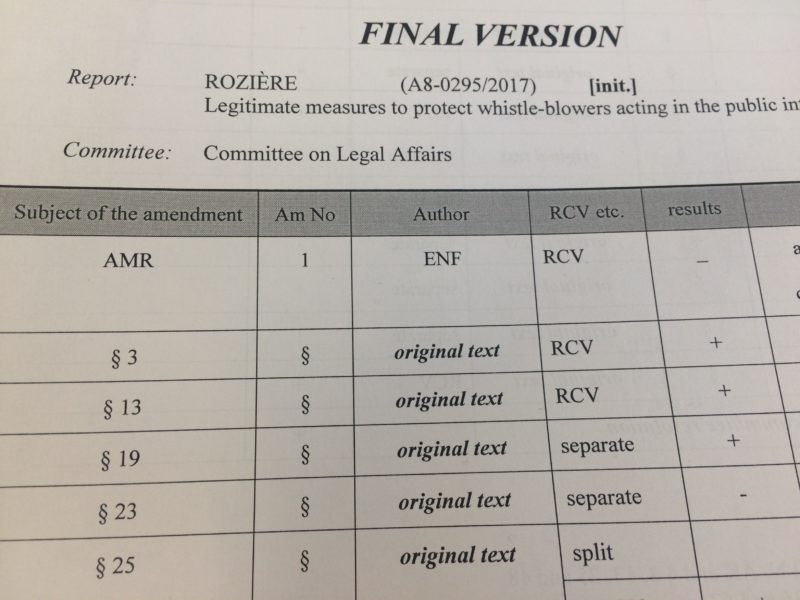 Since the beginning of the year, whistleblower legislation has been discussed and debated from many perspectives. Eurocadres has been in the forefront calling for EU-wide whistleblower protection. We have been worried that the European Commission will not move forward with the issue without support from the Parliament. We hope that the Parliament gave the push that was needed and it is likely that the Commission will act in the beginning of the year 2018.

Eurocadres will continue working for a European horizontal legislation on whistleblower protection.

The report that was approved today, does not per se, take a stance on the legal basis. However, it calls for horizontal legislation covering both private and public sectors. What is important, allowing whistleblowers to report both internally and externally was accepted. Hence, the whistleblower should have the right to turn to public authorities, NGOs or the media. There has been criticism and worry about going directly to the public without exhausting internal channels first.

According to Eurocadres, such a worry is unreasonable, because there are cases that would never have been revealed if only sticking to internal channels. The Parliament also approved the right to remain anonymous when reporting. This is because it “could encourage whistle-blowers to share information which they would not share otherwise”.

Eurocadres will continue working for a European horizontal legislation on whistleblower protection. The Commission should have the courage to initiate discussions of a directive proposal. Achieving a proposal that covers both private and public sectors is vital to protect whistleblowers across sectors. Our workers, public safety, health and environment are all at stake without courageous whistleblowers!