Protecting whistleblowers helps to encourage a culture of transparency and accountability for public and private institutions. As professionals and managers are those who are most likely to come in contact with information which needs to be disclosed, they are fighting in the first line. 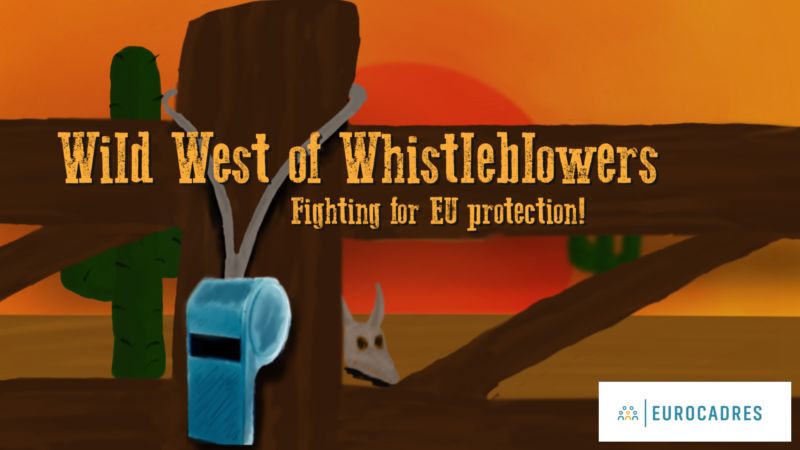 During the first day of the Eurocadres Congress a panel debate Wild West of Whistleblowers took place where views on current developments on EU level were put forward.

Director Anna Myers from Whistleblowing International Network was highlighting the many fields where whistleblowers are needed to report wrongdoings. Negligence of patients or malpractice on the health sector are especially alarming. She was also stressing the role of trade unions - reporting to your trade union should not be considered as an external procedure, it should be seen as a natural internal channel for reporting wrongdoings.

Reporting to your trade union should not be considered as an external procedure, it should be seen as a natural internal channel for reporting wrongdoings.

Professor David Lewis from Middlesex University, who is especially focused on employment perspectives, noted that it is extremely important that companies have internal reporting procedures in place. That usually generates the most successful outcomes.

The Commission Directorate-General for Internal Market, Industry, Entrepreneurship and SMEs (DG GROW) ordered a report earlier this year researching the effects of whistleblowing in public procurement. Presenting findings of the report was Senior Economist Meena Fernandes from Milieu. She  highlighted that significant economic savings can be generated through whistleblower legislation. In the Netherlands, as much as 22 euros for every euro spent can be gained through whistleblower protection.

Due to corruption the EU loses 120 billion euros each year, which could be saved by installing proper horizontal EU legislation on whistleblower protection.

For the past year, Eurocadres has worked towards EU-wide whistleblower protection and has gathered over 80.000 signatures in a petition calling for action.

There is strong support among Eurocadres members for EU-wide whistleblower legislation and that is why the Congress has adopted a resolution on whistleblower protection.

Due to corruption the EU loses 120 billion euros each year, which could be saved my installing proper horizontal EU legislation on whistleblower protection.

At present, legislation for protecting whistleblowers in most EU member states is a patchwork of different dispositions between countries and sectors. Only a few countries offer an extensive sector-wide protection, in most others legislation is fragmented and laws have been more reactive and scandal-driven than forward looking.  At the EU-level, provisions to protect whistleblowers can be found in some sectorial pieces of regulation, namely in in the finance sector.

Eurocadres has established a strong cooperation with most party groups of the European Parliament and a number of trade unions and other civil society organisations to work with the EU Commission for an EU legislative action. It calls for a directive, which sets a fundamental standard and is then transposed into national law by the member states.

Eurocadres adopted a resolution on whistleblowing during the Congress. Read the full text here.

Role of trade unions in setting up internal whistleblowing channels