Whistleblowers must be protected

Yesterday, on 17 October 2016, the platform that Eurocadres took the initiative to create on EU-wide whistleblower protection was launched. 48 organisations participated from the start, and more are joining. Show your support by signing the petition!

Blog continues after the petition...

There are several stories of whistleblowers that have received a lot of media attention over the past few years. One case worth mentioning in particular is LuxLueaks, where files disclosing the Luxembourg tax rulings were exposed. A tax avoidance scheme that has allowed companies to evade taxes in a way that on 11 January 2016 was deemed illegal by the European Commission. As a consequence, thirty-five large multinational companies that have benefited from this illegal tax regime will have to reimburse unpaid taxes of at least 700 million Euros worth. Antoine Deltour, the main leak, participated in the press conference yesterday, through a video message.

The LuxLeaks case so clearly shows that there are occasions when there is a clear need for people to step forward and disclose information. Especially when there are lives, health, environment or public money at risk. In this case it was a tax regime that supposedly was legal in Luxembourg, but which has created astronomical tax losses in other countries through this preferential treatment and later was found to not be in line with EU law.

Many whistleblowers do however never get any media attention. This to a large part is due to the simple fact that there are no problems. It is not uncommon that whistleblowers are not even aware of being whistleblowers. When they for example report internally or externally to competent authorities and corrections are made to change whatever was wrong, it has been a succesful case. The protection needs to be in place for the times when this is not the case.

What initially caused Eurocadres to get active on whistleblower protection was the trade secrets directive. When arguing for an improved directive I have many times stated that one shouldn't have to be a rocket scientist to understand if there would be a risk to step forward and disclose information, as a whistleblower, or if there would be a sufficient protection if things turn bad. These assurances are essential for people to muster the courage to speak out against wrongdoings and try to achieve change.

When companies have activities across borders and workers are mobile we cannot have a situation where it is impossible to know what your actual protection would be, if any. If you are a French worker, living and working in Spain for a German company, and you come across information about wrongdoings in the factory of the company in Poland...? What if the company is also active in different sectors? With a patchwork of legislation both in terms of national legislation and sectoral, it can easily become an almost impossible challenge to know your rights.

The patchwork approach forward, which is what the European Commission so far in its public comments have preferred, is a dangerous path forward which puts whistleblowers at risk.

The patchwork approach forward, which is what the European Commission so far in its public comments have preferred, is a dangerous path forward which puts whistleblowers at risk. It is time for a proper EU-wide whistleblower protection covering the broadest possible groups of workers, consultants, free-lancers, temporary agency workers, et.c. as well as different sectors. It should be truly cross-sectoral.

Sign your support in the petition at the top of this article! 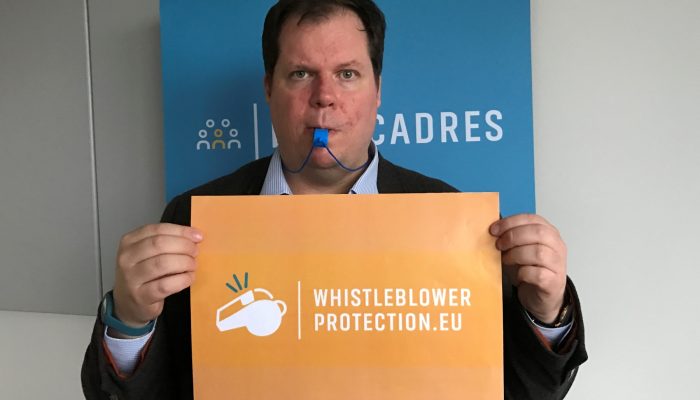